On Thursday 30 April – with one week to go before the election – we cycled to the offices of Serco, Jacobs UK, BAE Systems and Lockheed Martin, calling on them to lay down their work building nuclear weapons – these companies all profit from nuclear warhead production at Aldermaston and Burghfield AWE, near Reading. Their offices look like all other offices, but the work of these companies could cause nuclear war. We protested, sang songs, leafleted their workers and the public, and tried to show everyone where nuclear war begins (and ends!)

We finished by making the short journey from BAE’s offices to Parliament, where the final decision on Trident replacement will be made.

By the way – Campaign Against Arms Trade have a really nice Company’s map, where you can ‘Find the Arms Trade on your Doorstep!’ (i.e. find the offices of war profiteers). Find it here: https://www.caat.org.uk/resources/mapping

We started at Mitcham Junction (near Croydon), where we were greeted by friends from Croydon Quakers (one bearing a CND umbrella!), then we get a little lost, before finding the tucked-away office of Serco (WMD makers), and delivering our message to them. 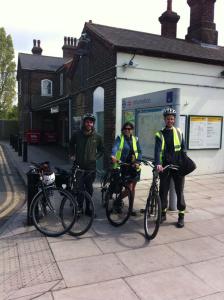 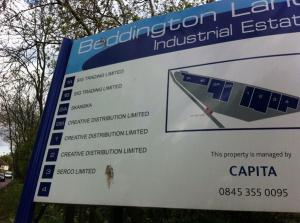 Stop two! Outside Jacob’s Engineering’s offices in Tower Bridge. Leafleting, delivering our message, talking to passers-by (in a variety of languages!). We were really glad to be joined by friends from Ealing Save Our NHS, who we met first in our cycle ride from London to Burghfield atomic weapons factory in March.

Then it was off to Lockheed Martin in Lower Regents Street, followed by BAE Systems just down the road at 6 Carlton Gardens. Sadly, BAE didn’t want to receive our letter, so we put it under the door! 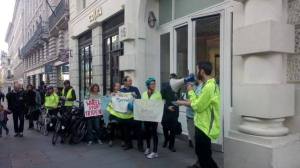 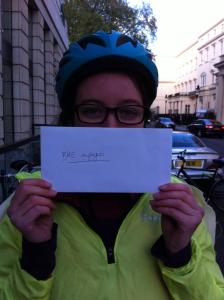 We finished up in Parliament Square, welcomed by the peace picket people, who you’ll see there for a few weeks yet. 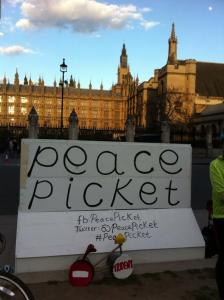